Expanding from City Center, Cardigan is “doubling down on downtown.” 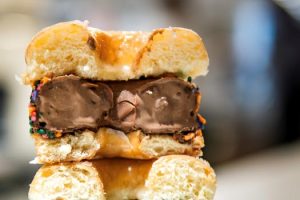 As workers slowly make their way back to downtown Minneapolis — and its skyways — Cardigan Donuts will be ready for them.

Pre-pandemic and pre-renovation of IDS Center’s Crystal Court, Bogart’s Doughnuts Co. ran a kiosk on the ground level that is now gone. The building was left with a doughnut hole, so to speak, and Cardigan owner Justin Bedford found a sweet way to fill it.

“We’ve always wanted to expand when the time was right and serve the entire skyway network,” Bedford said. “This pandemic has kind of opened up that opportunity.”

Cardigan’s signature items — Greek yogurt-enriched old fashioneds, coffee-glazed cake doughnuts, jam- and custard-filled bismarcks — will be assembled at the much larger City Center bakery and brought over to the IDS.

But the new 650-square-foot store will have something of its own: ice cream. Scoops, pints to go, shakes and doughnut-ice cream sandwiches — ice cream is shaped into a ring and coated with chocolate before being stuffed into a split raised glazed doughnut — will make the return to office life a little brighter, Bedford said.

“We think when people come back, they’ll want to celebrate, and we’re in the celebration business,” he said.

The ice cream will be made in-house, and in addition to chocolate and vanilla, there will be rotating flavors inspired by the bakery’s beloved doughnut combinations and coffee creations. The vanilla caramel coconut bar? That’ll be a flavor. The coffee counter’s nitro cold brew? Try it as a float.

There will be some seating, but Bedford expects customers to utilize the newly renovated atrium. Look for a February 2022 opening.

Cardigan is one of the stalwart skyway food businesses that stayed open throughout the pandemic, despite the ghost-town walkways left by many companies sending employees to work from home. It offered delivery early on, then launched a doughnut outpost in the North Loop, at FRGMNT Coffee (729 Washington Av. N., Mpls., frgmntcoffee.com).

By opening a block away from its first location, Cardigan Donuts is “doubling down on downtown,” Bedford said. “We’re very optimistic about the signs of recovery that are taking shape now. We love downtown. We’re excited to be here and give people a new reason to come back.”