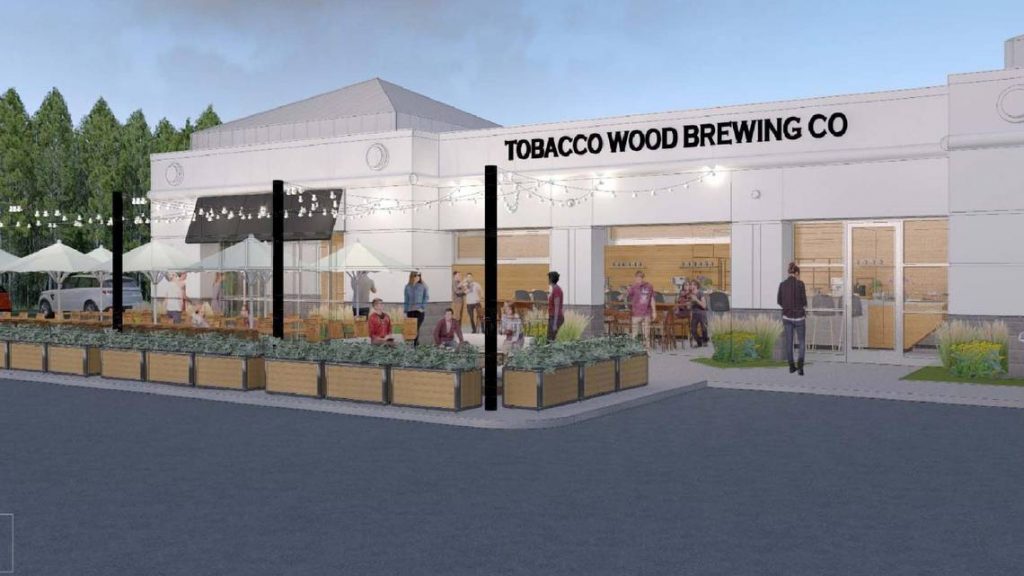 One day, hopefully not too far from now, the lost joy of the after-work beer will be a thrill again.

That is the world imagined by Tobacco Wood Brewing Company, an Oxford-based brewery set to open a new taproom and restaurant in Durham’s Meridian Business Park, right on the edge of Research Triangle Park.

This is the second location and first satellite taproom for Tobacco Wood, which will continue brewing its beer at its home base in downtown Oxford, built nearly three years ago in an old furniture warehouse.

With its new taproom, Tobacco Wood moves into a 4,782 square-foot space in South Durham’s Meridian Business Park, situated along Highway 55 near Interstate 40. The taproom moves into the former Cafe Meridian space at 2500 Meridian Parkway in Durham.

Tobacco Wood opened in 2018 as North Carolina’s first female veteran-owned brewery, and the first in Granville County. Owner Mara Shelton, who opened the brewery with her husband, Paul, served in the Army National Guard and the Air Force Reserves and is also a nurse.

“We make some pretty great beer, but I might be a little biased,” Shelton said in a phone interview.

RTP as a beer hot spot

Tobacco Wood joins a suddenly booming beer scene in and around RTP. The area is already home to Barrel Culture, known for its sour and wild ales, and Glass Jug Beer Lab, which is opening a second location in downtown Durham. Fullsteam Brewery, one of the Triangle’s most popular breweries, is also opening a new location in RTP Boxyard, a development of restaurants and shops built out of shipping containers.

Shelton said that community of breweries attracted Tobacco Wood to that part of Durham and that her brewery had already worked with Glass Jug on a beer collaboration.

“It’s an amazing opportunity right around the corner from a brewery we had partnered with in the past,” Shelton said. “We saw it and knew that’s the spot.”

The new Tobacco Wood will have 13 beers on tap and two draft lines for cider drinkers. The brewery’s head brewer is Matt Bisceglia, who came to Tobacco Wood from Fayetteville’s Huske Hardware Restaurant & Brewery.

“We have something for everyone,” Shelton said.

Tobacco Wood has signed a 10-year lease on its Meridian space. It is currently moving through Durham’s permitting process, but plans for an opening this spring.

The ongoing COVID-19 pandemic has dominated daily life for nearly a year, and its impact looks to continue for months. With many companies shifting to a work-from-home model during the pandemic, office spaces have emptied out. Marc Bellet, director of asset management for Accesso, the Florida-based company that owns Meridian, said offices have been running at 30 to 40% occupancy.

“Companies are erring on the side of caution,” Bellet said. “We’re seeing it getting better.”

The grand tradition of after-work drinks has been largely on hold since the start of the pandemic, but Tobacco Wood’s owners will welcome nearby office workers and apartment residents to be their regulars.

“Our target starting out will be serving the corporate lunch customer,” said Pierre Gingue, facilities manager and part-owner. “But our afternoons will be our bread and butter.”

Gingue said the brewery will cater to those who aren’t comfortable grabbing a drink in public with to-go sales. Tobacco Wood has been canning its beers for more than two years and has a Crowler machine to put any of its draft offerings in a 32 ounce can.

The space itself will include large open windows leading out to a wide patio of outdoor tables. Gingue said Tobacco Wood has room to space its tables out and allow for social distancing.

Shelton said Tobacco Wood was born as a small town brewery but is growing quickly in a short span of time. With the new Durham spot she hopes to keep the neighborhood vibe, just in a new neighborhood.