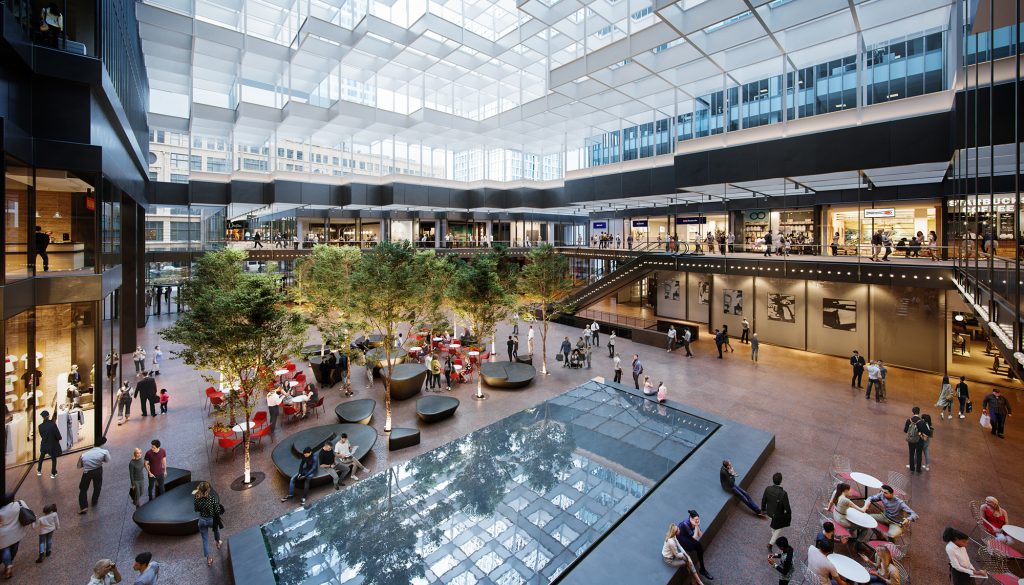 The owner of IDS Center is planning a renovation to Crystal Court at the base of the iconic downtown Minneapolis tower.

The 23,000-square-foot “urban park” will get an 800-square-foot reflecting pool with a 40-foot granite seating ledge and infinity edge. New trees will grow as tall as 24 feet, replacing the old Black Olive trees.

Originally built in 1971 and 1972, Crystal Court was designed by world-renowned architect Phillip Johnson, who called it the living room of the city. It has not been updated since 1998, when a 105-foot floor-to-ceiling water feature was installed. That will be removed as part of new plans by building owner Accesso of Hallandale Beach, Florida.

Other elements of the renovation include new modular boulder seating replacing the court’s 68 white benches, which will be donated for placement in Minneapolis parks.

General Manager Deb Kolar said the project will cost about $5 million. The plans have been in the works since well before Covid-19, but Accesso continued forward despite challenges for downtown brought on by the pandemic.

“I thought, why not right now? Accesso is committed to Minneapolis and committed to the IDS Center, and this just shows the level of commitment we have,” said Kolar, who has worked at IDS Center for 27 years.

The renovation is being designed by Perkins and Will, which has its offices in IDS Center overlooking the Crystal Court. Greiner Construction will be the general contractor and New History will consult on the project.

“We have had a lot of great design meetings just standing up there looking out at the court,” said Dave Dimond, principal and design director for Perkins and Will’s Minneapolis office.

Work will begin in December and wrap up in July 2021. The trees will be delivered from Florida, where they are growing, in May or June.

Crystal Court lost full-service restaurant Mission Kitchen just before Covid-19 hit. Kolar told the DMNA that Accesso is wrapping up negotiations on a lease with a new restaurant.

Accesso has invested $23 million into the tower and Crystal Court since purchasing it in 2013, Kolar said.