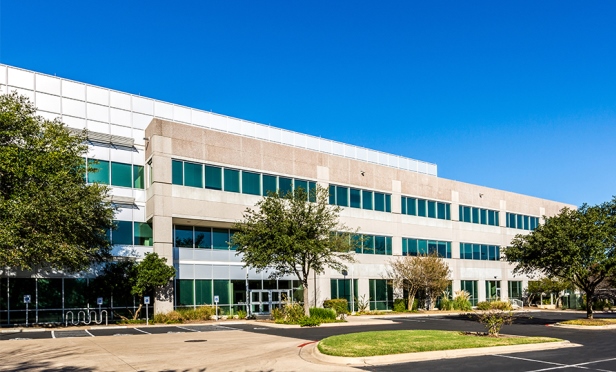 “The air emissions saved by eliminating 423,097 kilowatt hours is 226 metric tons of carbon dioxide,” Kuehn calculates. “This is the equivalent of removing 43 cars driving 506,608 vehicle miles annually from our roadways or planting 5,820 trees or 291 acres of forest in Austin’s parks.”

The check was presented to Riata’s owner, Accesso of Hallandale Beach, FL, which invested $620,000 to add new pre-cooling technology to its HVAC units. Accesso previously received more than $10,000 in rebates from the city for investing in a new LED lighting system for BRI 1868 Riata LLC, the park’s official name.

“Accesso has adopted a corporate policy to make the office properties in our investment portfolio as green as humanly possible,” says Ariel Bentata, Accesso founding and managing partner-investments. “We are interested in all ways that will help our tenants reduce operating expenses, directly benefit the environment and cut our own costs.”

Bentata cited Austin Energy’s “vision and generosity” along with the technical expertise of Evaporcool, a Memphis-based firm that upgraded the efficiency of Riata’s HVAC system in four and a half months, with “no disruption to our tenants.”

“The real secret to this success is the communication and teamwork between city leadership, private enterprise and our energy consultant,” Bentata tells GlobeSt.com. “There was no bureaucracy, and no unnecessary delays or frustration. The city and its energy utility have a make-it-happen mindset.”

Kuehn says the city is willing to pay substantial rebates to customers who make energy efficiency investments “because we have to pay higher prices for electricity we buy from the grid on the hottest days of the year or what we call peak load days. When a proactive customer like Accesso improves its efficiency and reduces its overall energy consumption, it keeps costs down.”

The air conditioning retrofit has other financial benefits that extend beyond reducing energy consumption and lowering electricity costs, according to Tony Clasen, Accesso’s director of national operations.

“With Evaporcool’s new pre-cooling technology and equipment, we reduce overall maintenance and repair costs. Plus, the lower electricity consumption puts less stress on the HVAC equipment and provides a consistently comfortable work environment, which extends its useful life,” Clasen says.

The retrofitting is expected to save Accesso $15,800 monthly or $190,000 annually off its Riata energy bill, says Jenna Duke, Accesso Services on-site property manager for the 688,000-square-foot office campus. Riata houses 17 companies ranging from the global pharmaceutical giant Allergan and Accenture to United Health Group and Conduent.

This pre-cooling technology and equipment from Evaporcool is one of the keys to the energy-saving efficiencies.

“We combine the power of evaporation with current breakthroughs in HVAC pre-cooling technology,” says Evaporcool president Chris Curry, ”to help businesses, utility companies and their stakeholders reach their sustainability and financial goals.”