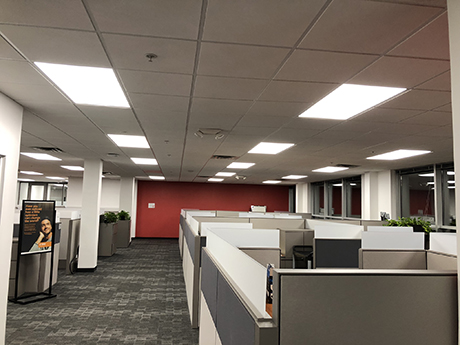 DURHAM, N.C — The term “environment” is typically thought of as being strictly outdoors, but for office owners, investors and tenants, the interior of office buildings is an environment unto itself. And like planet Earth, an office environment needs investment in order to protect its inhabitants.

Goldstein, whose 15-year-old company owns Class A office towers spanning 15 million square feet in major U.S. cities, contends “it makes good business sense to invest capital in an interior environment where employees are productive, efficient and above all, healthy, which cuts down on illnesses and absenteeism and contributes to job satisfaction.”

Accesso Partners is doing more than just preaching. In Durham, the institutional commercial real estate fund recently installed a new lighting solution at its 10-building, 690,520-square-foot space within the Meridian Corporate Center, which is adjacent to the famed Research Triangle Park. The result has been brighter offices that are easier on the eyes and more conductive for close-up, meticulously detailed work.

There is also a flipside to that equation that pays dividends on the owner’s investment, Goldstein explains.

“We’re very concerned about how our corporate assets promote a healthy environment in the public spaces and beyond the buildings walls,” he says. “Call it sustainability where we are conserving electricity and other energy resources for the property and the surrounding community. Investing in sustainability can enhance the quality of the property.”

By using less power, he says, there are obvious massive annual savings in kilowatt hours expended that translates into a financial savings for the landlord and a dramatic reduction in carbon dioxide emissions in the atmosphere. Plus, the reduction in Meridian’s kilowatt consumption means there is less drain on the area’s power grid and more energy available for other business and residential users.

“This is one of those rare cases in American businesses where simply retrofitting the lighting system — converting from the traditional fluorescent tubes to LED tube or light-emitting diodes — can be a win-win-win-win-win,” says Catherine Winder, property manager at Accesso. “Tenants, employees, Accesso, the surrounding neighborhood and the environment all benefit and the results can be measured and quantified.”

Accesso, working with Onpeak Energy, an Aventura, Florida-based energy efficiency consulting firm, has retrofitted 11 of its office properties across the country to date. But given its size and large tenant base, Meridian Corporate Center was a challenge.

Jorge Robaina, managing partner of Onpeak, says the retrofit solution began with a property-wide assessment “to look at all the ways we could improve the office spaces, minimize maintenance expenses and generate savings.”

“Duke has a very proactive rebate program where it encourages corporate (power) users to maximize energy efficiency and it will pay them for conserving electricity,” he says.

The study, which took three weeks to complete, determined that by installing LED lighting, Accesso could expect to realize an annual savings of $259,000 a year for Meridian Corporate Center. The project qualified for $200,000 in rebates from Duke Energy and the remaining portion was in maintenance expenses. LED lighting has three to five times the operational life of fluorescent lighting so the building owner saves money on the labor and cost of replacing lighting and has fewer complaints from tenants.

In addition to the energy and maintenance savings, notes Robaina, the Meredian Corporate Center retrofit will contribute positively to the environment by reducing over 2 million pounds of carbon dioxide per year.

Employees from companies in the Accesso-owned buildings in Meridian Corporate Center report the conversion from fluorescent to LED lighting went smoothly and did not interfere with their work day. Doug Watson, facilities director for Parexel International, a global research organization that provides drug studies for pharmaceutical companies, says the light fixture exchange was done over a weekend “with no disruption at all.”

Another Meridian tenant says the switchover to LED lighting delivered even, consistent brightness with no glare throughout its office. Connie Lawson, operations support manager for NiPERA, Inc., the nonprofit science division of the Nickel Institute which promotes how the mining, production, use and disposal of nickel affects human and environmental health, says her “employees eyes quickly adjusted and brightness is the new normal.”

Operationally, Lawson sees a dramatic difference. “With the old lighting system, the fluorescent tubes were not energy-efficient, would burn out or would flicker which can be annoying when they go out of synch.”

As the support specialist, her biggest concern was the possibility of “downtime” that would interrupt employee workflow or that the wooden tables in the video conferencing room could be damaged by a dropped screwdriver or other tool. Said Lawson: “The LED system was installed during the night — from 7 am to 7 pm — which did not cut into our productive time.”