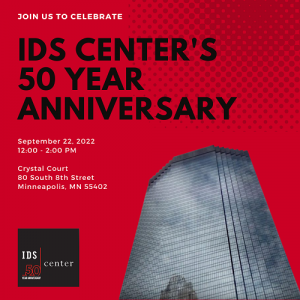 IDS Center, the iconic centerpiece of downtown Minneapolis, today announced that, in partnership with mpls downtown council (mdc), it is hosting a special ceremony on Thursday, September 22, in celebration of the IDS Center’s 50th anniversary.

IDS Center and mdc invite the Minneapolis community to partake in the ceremony and enjoy the thoughtfully crafted schedule of events in celebration of the property’s golden anniversary. The event will take place in the Crystal Court, Minneapolis’ central gathering place, from noon – 2:00 p.m., and will feature:

Over the last 50 years, the IDS Center has played host to many high-profile events, including the 2021 NCAA Men’s Final Four, where ESPN’s Dick Vitale and Digger Phelps broadcasted live from the Crystal Court; the 2008 Republican National Convention, where the property served as the official VIP media hub for local and national media networks; and the 1992 and 2018 Super Bowl kickoffs, where national broadcast networks conducted interviews in the lead-up to the game. What’s more, the property has served as a filming site for several blockbuster television shows and movies, such as The Mary Tyler Moore Show, The Mighty Ducks, Purple Rain, Young Adult, Joe Somebody and Fooling Around.

“I have been with this property for 30 years now, and I haven’t gone a single day without someone from the community telling me how much the IDS Center means to them,” said Kolar. “It is truly an honor to represent this building and all that it signifies, and we are excited to pay homage to the history of the IDS Center with our event on September 22. We greatly look forward to celebrating with many familiar faces and welcoming back those men and women who played critical roles in bringing this property to life.”

IDS Center is owned by Accesso, a fully integrated investment manager and operator of multi-tenant office buildings and multifamily properties.