The school is expected to take occupancy in December. 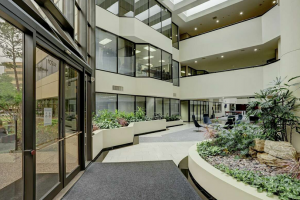 Accesso Partners completed a renovation of its Ashford campus in the Energy Corridor.

Denver College of Nursing is establishing a campus in Houston and has signed a new lease with Florida-based Accesso for nearly 30,000 square feet in the Energy Corridor.

Starting in December, Denver College of Nursing will occupy 29,840 square feet on the third floor of Ashford 6, at 1155 Dairy Ashford in the Ashford office complex. The Houston campus will offer a pre-licensure Bachelor of Science in Nursing program taught in person, according to the college.

The deal is the latest in a string of leases in 2022 following renovations to the three-building Ashford campus spanning 570,052 square feet near Interstate 10 and Dairy Ashford in west Houston.

Accesso, an investment manager and operator of office and multifamily assets based in Hallandale Beach, Fla., has signed more than 108,000 square feet of leases so fa this year at Ashford, including deals by Houston Research Institute, Houston Medical Imaging and engineering consulting firm Smith Seckman Reid. Ashford features renovated lobbies with new seating areas, and shared amenities including a fitness center and conference center with kitchen and reception facilities.

Denver College of Nursing said Houston’s stature as one of the nation’s fastest growing cities with a growing population of residents age 65 and up factored into the decision to establish a location where there is a substantial need for nurses. Students will also have an opportunity to gain clinical experience in addition to studies in the classroom.

“We have students from around the country who are interested in our programs,” Brandon Villarreal, campus president of DCN Houston, said in a statement. He noted that the Memorial Hermann Health System, one of the region’s largest hospital systems, welcomes students for clinical studies and is excited to have DCN Houston in the area.

With the latest lease, Ashford is 64 percent leased, according to Accesso. The renovations were made to position the buildings for new tenants following the departures of ConocoPhillips and Sasol.

“We are very pleased to have had a very strong year on the leasing front at Ashford, which is a testament to our value creation strategy and the strength of our operating platform,” said Mike Adams, managing director – Southern Region for Accesso. “The leases with DCN, Houston Research Institute, Houston Medical Imaging and Smith Seckman Reid further solidify that our decision to undertake a cosmetic refresh of the property and expand our tenant amenity program was well executed and well received.”

Robert LaCoure, Jill Nesloney, Chris Lewis and Bryce Adams of Lee & Associates – Houston brokered the lease behalf of Accesso. Darren Shibuya and Anya Marmuscak of JLL represented Denver College of Nursing, which is part of a network of schools managed by Education Affiliates, in the 12-year lease agreement.