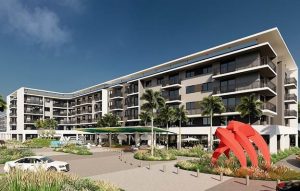 Two South Florida real estate firms have formed a company to jointly develop thousands of apartments along with retail and office space in the Sunshine State’s fastest-growing areas.

Commercial real estate investment manager Accesso and Meyers Group, a longtime apartment developer in Florida, plan to develop more than 5,000 market-rate housing units through a venture called Meyers Group Partners in areas such as Palm Beach County, Fort Meyers, Melbourne, Miami and Fort Lauderdale. About half of the new apartment developments will involve mixed-used projects with plans to include 1.5 million square feet of office and retail.

The deal involves projects already under construction and those in planning stages. Robert Shapiro with Meyers Group said there are eight to nine sites under contract and another dozen in the works. The venture is building a second phase of apartments at Dania Pointe in Fort Lauderdale comprising 336 units that would add to the 264-unit development that opened in 2020.

“We’re focusing on easily accessible sites,” Shapiro said in an interview with CoStar News. Those sites are near major interstates and high-capacity arterial roads.

The new venture is banking on Florida’s employment growth continuing a strong recovery after taking a hit early in the pandemic. Florida’s population grew 14.56% between 2010 and 2020, bringing it to 21.5 million residents in 2020, according to the Census Bureau. Between 2020 and 2021, Florida had the largest domestic and international net migration gains in the country.

Job and population gains have pushed apartment rents higher across the state. “Palm Beach is No. 1 in the country for rent growth among major markets since the start of the pandemic,” said David Kahn, CoStar’s director of market analytics for the Southeast.

He said Miami and Fort Lauderdale have been outpacing the national average for rent growth. Blackstone Group and Microsoft are among the several high-profile companies leasing new office space in Miami.

Rents have also been rising strongly in the Melbourne area, according to a report by Lisa McNatt, CoStar’s director of market analytics for Central Florida.

The Melbourne area is an integral part of the region known as Florida’s Space Coast, a world-renowned aerospace hub. The region is home to NASA’s Kennedy Space Center and Cape Canaveral Air Force Station, in addition to the launch and manufacturing operations of space companies including SpaceX, Boeing Co., Blue Origin and Lockheed Martin Corp. The growing private space industry near the rocket launch pads has been driving the need for more housing there.

More than 2,200 apartment units are under construction in the Melbourne area, according to CoStar data. Meyers Group Partners is in the late stages of obtaining the necessary approvals to build a 326-unit, seven-story apartment project in Melbourne, Shapiro said.