The Crystal Court in the IDS Center is getting its first upgrade since 1998. 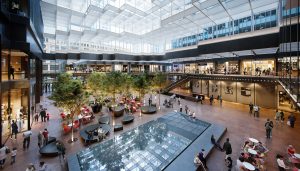 A revamped Crystal Court in the IDS Center will feature new seating and canopies of trees expected to grow 24 feet tall.

It’s rare to find the interior of a 50-year-old building unaltered.

Styles change, tastes change. Classic motifs from the 1920s would have looked aged and stuffy by the 1970s. The thought of a ’70s interior — brown, ferns, exposed wood that gave you a splinter if you brushed up against it — might make you wince now. Ditto the mirrors and geometric shapes so popular in the ’80s.

And then there’s the Crystal Court in the IDS Center. Its design is over a half-century old, and it’s absolutely timeless and impossible to improve. All they can do is rearrange the furniture. Which is sort of what they’re doing.

If you’ve visited Crystal Court recently, you’ll have noticed that the main floor is being overhauled — for the first time since 1998. According to Accesso, the tower’s owner, the benches will be replaced by “modular boulder seating,” and existing trees will be replaced by trees expected to grow much taller than the old ones — 24 feet, if all goes well. 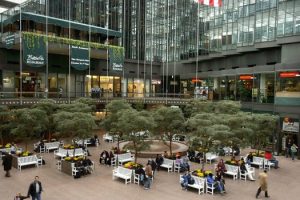 The fountain, installed in the late ‘90s, will be updated.

The fountain, installed in the late ’90s, will be updated, too. Water fell 105 feet, in a sort of perpetual rain, into a basin. Some thought it was a pleasing piece of nature, magically imported into a controlled environment. Others thought it looked like the roof leaked.

Its replacement will be an infinity edge pool. Less kinetic, more restful. Whether that’s a metaphor for post-pandemic downtown, we’ll see. The $5 million update, which is being branded as “cosmetic,” is expected to be completed by July.

As pleasant as the new Crystal Court may be, it won’t inspire the coverage the original design received. Minneapolis had nothing like it when it first opened. Not many cities did.

It was likened to the Piazza San Marco in Venice by the Christian Science Monitor’s architecture critic.

“At IDS Center,” he wrote, “the Crystal Court serves a congenial function. People have reason to gather. They have reasons to tarry, and, at the same time, the system of interconnected bridges and esplanades, feeding into the court and threading through it, supply quick, convenient, weather-safe passage.” It was, he concluded, “a work of technology and art.” 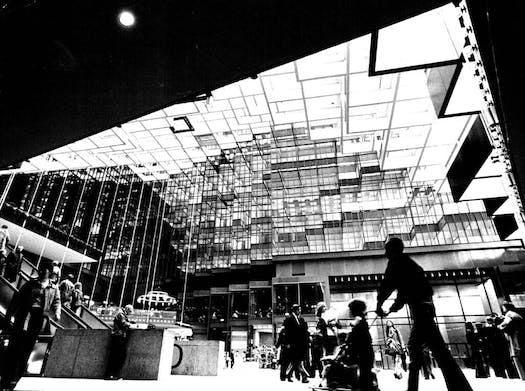 Barbara Flanagan, the Star’s indefatigable booster of gracious urban living, raved about the court’s addition to downtown life. In a 1971 column, she relayed an unconfirmed rumor that architect Philip Johnson “wants to put a 50-foot-high fountain” in the courtyard.

It was true. Johnson proposed a bronze pillar with water flowing down the side. It was cut for “budgetary reasons,” but not before footings to carry the heavy load were placed beneath the floor.

Speaking of “beneath the floor,” how many people recall the amenities of the basement? Sorry, the concourse level. In 1972, Minneapolis Tribune columnist Will Jones wrote that the level below street level would have an arcade with shops, a bar and a ballroom. There also was a 450-seat movie theater, which Minneapolis Star columnist Don Morrison described as a “small, glowing gem of a theater.”

Attendance, however, was poor. The theater closed in 1976, and was converted into a conference center.

The IDS Center went up with great speed. It was only a year from the time the first column was set until the last steel beam was placed.

In June 1972, the Crystal Court had its grand opening, serenaded by the Minnesota Orchestra led by Mitch Miller, a popular bandleader known for his singalongs. (Andy Warhol was on the VIP list. He didn’t show.)

The IDS may not have delivered on its lower-level attractions. But the Crystal Court still has the same bright, clear sense of place it had almost 50 years ago. It’s a crossroads, the piazza, the heart of the city. And, for all the trials the city has seen, we are fortunate to be here, and call this ours.