Tenant needs are changing fast. Here’s what owners and managers should expect.

A year and a half after it first shut down the country, the COVID-19 pandemic is still a looming presence and a guiding factor for owners and tenants of office properties across the U.S. As the needs of office users continues to evolve, owners and managers are carving out new best practices for their properties.

Once again, it’s too soon to gauge when tenants will return in large numbers. As recently as last spring, 44 percent of tenants surveyed in a study commissioned by Building Owners and Managers Association International said that they expected to return to the office during the second half of 2021. 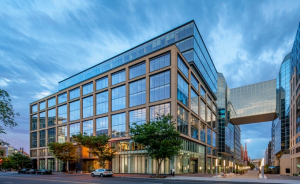 But in many cases, the Delta virus has thrown a wrench into those plans. While some owners are proceeding full steam ahead, other office users have renewed misgivings. Amazon, Apple, Dell, Lyft and Microsoft and other major corporations made late-summer decisions to postpone the return to in-person work.

For those tenants who do return this fall, hybrid work schedules will typically be the name of the game. Companies large and small have adopted flexible schedules allowing employees to work from home part of the time to ensure employees’ safety and health and in light of the uncertainty of the virus.

“We think that the new norm will be a bit of a hybrid,” said Cushman & Wakefield’s Drew O’Connor, who serves as senior managing director of asset services for the firm’s New York City region. Participants in the BOMA study found that the average number of workers in the office full time would drop from 70 percent before the pandemic to 43 percent over the next 12 to 18 months.

Another factor is the widespread emergence of the Delta variant, which did much to produce the surge of new cases over the summer. As a result, workers’ comfort in returning to the office plummeted, according to a survey by market research company Morning Consult. Just 55 percent of remote workers felt comfortable going back to the office as of Aug. 11, compared to 73 percent a few weeks prior. The number was the lowest since April, according to the firm. 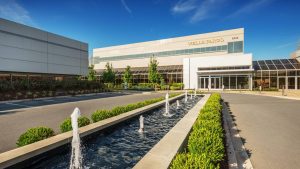 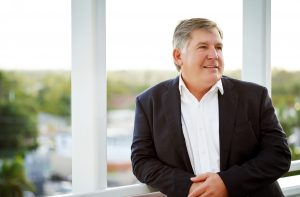 By now, owners and operators have gotten the hang of new protocols surrounding cleaning and sanitizing office spaces. However, new challenges have arisen. For many operators, staffing their properties is now the biggest hurdle to reopening. When nationwide shutdowns emptied out office buildings, janitorial staff and security contractors were often the first workers let go.

As owners prepare to welcome back tenants, a nationwide labor crunch is pointing to more competition for talent and higher costs. Wages and salaries for all real estate workers ticked up 1.2 percent during the three months ending in June 2021 and 2.4 percent from June 2020 through June 2021, the Bureau of Labor Statistics reported.

Accesso Partners, a manager, owner, and operator of office properties totaling 16 million square feet across the country, has struggled with staffing at some of its buildings, said Tony Clasen, the firm’s national director of operations. Filling positions that pay an hourly wage is particularly challenging.

“We expect we’ll have to pay more money for those services,” said Clasen—somewhere on the order of 16 percent to 18 percent, he estimates.

Labor shortages are prevalent across the country for commercial properties, as they are in other industries. One of the biggest reasons? A mismatch between unemployment benefits and current hourly salaries often makes it more attractive for workers to stay at home, noted Kimberley Morgan, managing director of property management at Stream Realty Partners.

In April 2020, shortly after the onset of the pandemic, the unemployment rate spiked to 14.8 percent. While that figure had dropped significantly to 5.4 percent by July 2021, it is still elevated from the pre-pandemic rate of 3.5 percent in January 2020, according to the Bureau of Labor Statistics.

“Everyone’s looking for workers, but it’s more cost-effective for them not to work,” said Morgan. 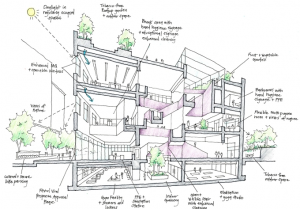 A vision of the office of the future. Image by Alissa Johnson of the Center for Active Design

Operators must also grapple with rapidly changing patterns of energy use. In mid-March of 2020, when shutdowns quickly took hold across the U.S., offices resembled ghost towns. While many buildings were still open to some degree, or at least partly staffed, energy consumption plummeted.

An analysis of the portfolio managed by Cushman & Wakefield in the New York City metro area showed that energy consumption was down at least 20 percent last year, and at some properties, upward of 40 percent. The dip was mostly due to reduced plug loads, particularly demand from lights and computers. However, the new standard of bringing in fresh air and improving ventilation led to increased power use on the base building side. With many tenants returning on a hybrid schedule, overall energy usage could still trend downward for the long term.

“Before COVID, densification (of office workspaces) was the key,” said O’Connor. “I think we’ll see a little bit of a pause on that process for a while, which should bring down energy costs.”

In newer or retrofitted properties, operators have been able to shut down portions of the buildings that have remained vacant throughout the pandemic, reducing energy usage and producing savings for the owner.

Irvine, Calif.-based RiverRock Real Estate Group was able to shut down entire unoccupied floors of some of the office buildings, as well as elevator banks that aren’t needed.

“Anything we could do to save energy costs with no inconvenience (to) the staff or tenants,” said Steve Core, the firm’s president. “There’s always a fine balance between customer service and efficiency. With all those tenants paying full rent, we want it running at capacity.” 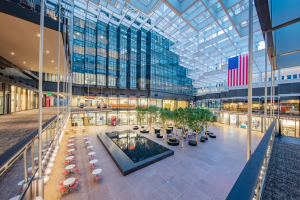 The newly renovated Crystal Court within the IDS Center in Minneapolis, the largest office property in the city. Image courtesy of Accesso Partners.

If there’s anything the experience of COVID-19 has taught the real estate industry, it’s to be prepared for change at a moment’s notice. For Morgan, that means making time to watch out for your employees.

“You have to make sure your team members are OK—that’s number one,” said Morgan. “You need to make an effort to reach out to them on a regular basis.”

Employee mental health and well-being is an issue that Joanna Frank, the president & CEO of the Center for Active Design, has been working on throughout the pandemic. Her firm advises clients like BGO, Hudson Pacific and Brookfield to focus on engaging with employees and understand where they are coming from.

“We’ve all gone through the same storm but in different boats,” said Frank. “There is a real business rationale for why companies can care and should care about prioritizing mental health and reducing stress and anxiety: because it will affect productivity and satisfaction.”

Morgan of Stream Realty also suggests giving property management team members the opportunity to learn something new, especially at less-occupied buildings where activity has slowed down. “Let them start cross-training and growing through the process,” she said.

And with so many owners saving money last year because of reduced energy use, it is a good opportunity to take a closer look at the budget and think outside the box. As Morgan frames the issue:

“What can you do to benefit your building? What was put on the back burner in 2020 that you can do in 2021 with all the money you’re saving? You have to be creative and think progressively. That’s what owners are paying us for.”