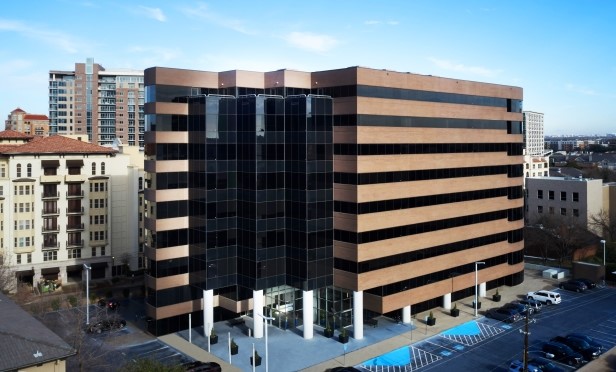 Florida investor purchased the high-rise in 2014

A Florida investor says it has bumped up the occupancy on its Uptown Dallas office building to almost 95%.

Accesso Partners bought the 2626 Cole building in 2014 and has been working to reposition the property. The nine-story office is near Turtle Creek and across the street from the Quadrangle shopping center.

Accesso made upgrades to the tower — built in the 1980s — and has increased occupancy in the property by 35%.

The investor recently signed a lease with coworking company WorkSuites to take more than 26,000 square feet in the building. Other tenants include Penn Davis McFarland Inc., Performance Cos. and Medtrials Inc.

“The capital improvements and programs we have implemented at 2626 Cole have positioned us to benefit from Dallas’ thriving economy and robust demand for class A office space,” Accesso’s Moises Benzaquen said in a statement. “This leasing milestone proves that office tenants are seeking the value-add amenities and modern qualities offered by this and other buildings in Accesso’s portfolio.”

Upgrades to the building included remodeling the lobby areas and exterior.

The Cole Avenue building is in an area of Uptown seeing significant redevelopment. The landmark Quadrangle project is adding an office tower and new retail. And less than a block away on Routh Street, a new high-rise complex is planned for offices, apartments and a hotel.