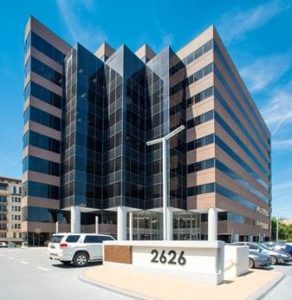 A West Coast private equity firm has decided to expand its real estate holdings in Texas once again by buying an office building in a popular Dallas neighborhood within walking distance of the Katy Trail, a 3.5-mile path built along a historic rail line from Southern Methodist University to the American Airlines Center.

Talon Private Capital, based in Bellevue, Washington, bought a nine-story, 120,599-square-foot office building at 2626 Cole Ave. in Dallas for an undisclosed price from Partners Group and Accesso. Talon’s previous real estate holdings in Dallas included 2525 McKinnon until it sold the property in 2017. The investment firm has a history of buying properties along the West Coast but has identified Dallas’ Uptown neighborhood as having significant potential, according to the company’s website.

In the case of 2525 McKinnon, Talon upgraded the common areas and infrastructure, helping push up rents in the building and ultimately the sale to another investor.

For Talon’s purchase of 2626 Cole, the sellers recently completed capital improvements, which helped drive occupancy up 35% with new leases from companies like WorkSuites, Republic Editorial and Annandale Capital. According to CoStar data, the building is 94% leased.

John Rivard, Accesso’s chief investment officer, said the company plans to use the proceeds from the sale of the building to continue to scale its portfolio in non-gateway U.S. cities, including Dallas, and reinvest in its existing portfolio.

Uptown is one of the most sought-after office destinations in Dallas, but the area, like every other major U.S. city, has seen an impact on leasing from the pandemic, with the area reporting a slightly negative net absorption rate for the past 12 months, according to CoStar’s market analytics, indicating more tenants moving out than in. CoStar’s analysts say they expect the area to perform well in the future.