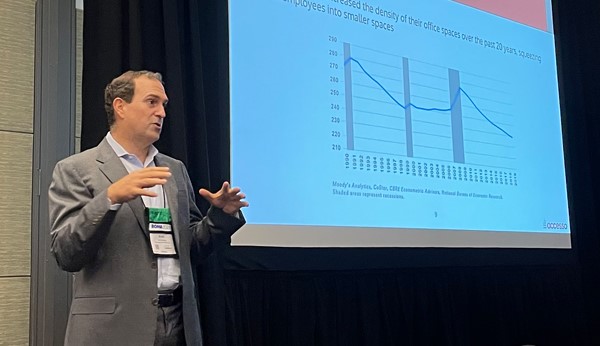 The Friday afternoon education session “The Future of Work: Navigating the Lasting Effects of the Pandemic on the U.S. Office Market” examined some major questions that commercial real estate professionals undoubtedly have on their minds as the pandemic lingers: How has remote work affected the U.S. office market? When can we expect to see vacancies plateau and decline? What do leases look like now? How and when will things improve?

Session leader Ariel Bentata, founding and managing partner of investments for Accesso Partners, explored these questions and organized his presentation into three sections: trends seen before the pandemic, the impact of COVID-19 and what the future holds.

Before the pandemic: To start, Bentata explained that many of the trends we’re seeing right now were already in the works pre-pandemic, including the rise of remote work, the shift from central business districts (CBD) to the suburbs and office densification.

Companies have also increased the density of their office spaces over the past 20 years, moving more employees into smaller spaces.

Impact of COVID-19: Bentata cited a study done by Cushman & Wakefield that showed office vacancies rose by 3.1% over the past 18 months (compared to about 2% during the financial crisis more than a decade ago)—but an uptick in occupancy occurred in Q1 and Q2 of 2021.

“We think that the worst is over,” he said. “We’re going to start to see some positive numbers. We have a portfolio of about 50 (sic*) million square feet, and we’re starting to see a lot more leasing activity, a lot of tours and proposals.” However, shared Bentata, “People are taking longer to evaluate the proposals. They’re taking longer to make decisions.”

As a result of the pandemic, Bentata said numbers for subleases are up everywhere, as well as for concession packages. But the latter has stabilized and even fallen slightly over the past quarter. Average lease terms fell initially but have risen over the past quarter. He added that overall transaction volume rose by 28.7% in Q2 of 2021 from the lowest points of the pandemic.

What the future holds: Regarding working from home, Bentata cited a Gensler U.S. Workplace Survey from this summer that found that 44% of people do not want to work from home after the pandemic subsides. Only 12% said they’d like to work from home full-time (five days a week). The survey also found that the younger generations are more likely to want to think and brainstorm at an office than older generations.

“Working from home does not provide the same level of interaction” that younger professionals need, Bentata said. “You don’t have the same camaraderie. You don’t meet a lot of people. You don’t get a lot of mentorship. Younger people need the office more.”

Bentata predicts a trend of moving generally from urban offices to suburban offices over the next several years, caused partly by companies creating satellite offices in the hub-and-spoke model to give employees shorter commutes and more convenient locations. He also expects that markets with lower costs of living that offer better lifestyle dynamics will benefit from the newfound health concerns in gateway/commuter cities, as well as the perceived long-term ability to work remotely.

And although some employees now favor greater flexibility in the ability to work from home, providing the option of going to an office will remain imperative for attracting and retaining strong talent, as well as establishing and showcasing company culture.

There’s definitely room for numbers to improve, but the office isn’t going anywhere.