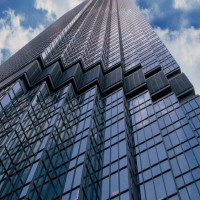 MINNEAPOLIS (WCCO) – For years, there’s been a friendly debate between the Capella Tower and the IDS Center over who’s taller.

According to Emporis, a global provider of building information, IDS tops the list of tallest buildings in Minnesota at 792 feet. The Capella Tower measures in at 776 feet.

“Once you put those two large antennas on the top of the tower, that gets us to 792,” said Deb Kolar, the general manager of Accesso at the IDS Center.

This spring, two new tall buildings will open and change the Minneapolis skyline once again. Eleven on the River, a luxury high-rise that opened in early March, stands at 550 feet. RBC Gateway, a residential/hotel/office space, stands at 519 feet – making them the 8th and 9th tallest buildings in Minnesota.

St. Paul’s tallest building, Wells Fargo Place, stands at 471 feet. It would rank 14th tallest were it in Minneapolis.

“St. Paul is the government hub where Minneapolis is the economic engine,” said Kolar.

According to Emporis, similar-sized Seattle has 126 skyscrapers. Denver has 49 and Detroit has 34.

Data from Ryan Companies shows the Twin Cities has more skyscrapers per capita than Atlanta, Boston, Houston and Philadelphia.

“For the size of our community, we have a large number of skyscrapers,” said Sarah Anderson, President/CEO of BOMA Greater Minneapolis. “When you add in St. Paul, that bumps us up even more.”

According to UMN architectural historian Tom Fisher, the city of Minneapolis wanted any tall buildings to be roughly the same height at the IDS Center back when the Capella Tower and Wells Fargo Center were built in 1992 and 1998 respectively.

Anderson says the Twin Cities don’t have the need or demand for such tall buildings. She also points out the business across the region that has several office buildings scattered among suburbs.

“Also, you have to look at we’re a community that looks at how will this aesthetically complement our community, so you have to consider that too,” Anderson said.