Alex Smith, textiles and screen printing lab lead and free wall instructor, leverages graffiti to explore the story that has yet to be written about this space and its future.

The IDS Center’s famed Crystal Court is undergoing a $5 million makeover. The white benches will be replaced by modular boulder-shaped seating (not quite like the big gray “rocks” in the Walker’s redesigned lobby, but those come to mind). The cascading water feature will give way to a granite reflecting pool with infinity edge. Instead of black olive trees in garden boxes, a grove of taller trees will grow up from the floor.

During the renovations, much of the 23,000-square-foot space is surrounded by temporary walls. Rather than leave them blank, building owner Accesso saw them as a giant canvas for work by local artists.

The firm turned to Juxtaposition Arts in north Minneapolis. Roger Cummings, JXTA’s chief cultural producer, and Alex Smith, who founded and leads the textiles and screen printing lab, worked together. Cummings used snapshots, images and quotes to reference the history of the IDS and Minneapolis; Smith used graffiti to play off of Cummings’ work and suggest the future. 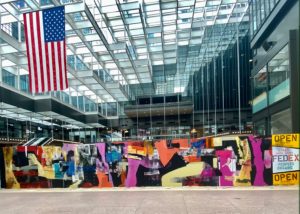 Roger Cummings, chief cultural producer of Juxtaposition, celebrates Minneapolis’ past and present by connecting snapshots, images and quotes that are representative of the history of the IDS Center and Minneapolis.

Both artists are lifelong Minneapolis residents. Their collaboration is a big, bold, colorful statement worth stopping by to see.

Founded in 1995 by Roger Cummings, DeAnna Cummings and Peyton Scott Russell, JXTA, a youth-serving arts nonprofit, is undergoing its own significant changes. It has plans for a new building and is halfway through a four-year, $14 million capital campaign. In June 2020, DeAnna Cummings left JXTA to lead the McKnight Foundation’s arts program.