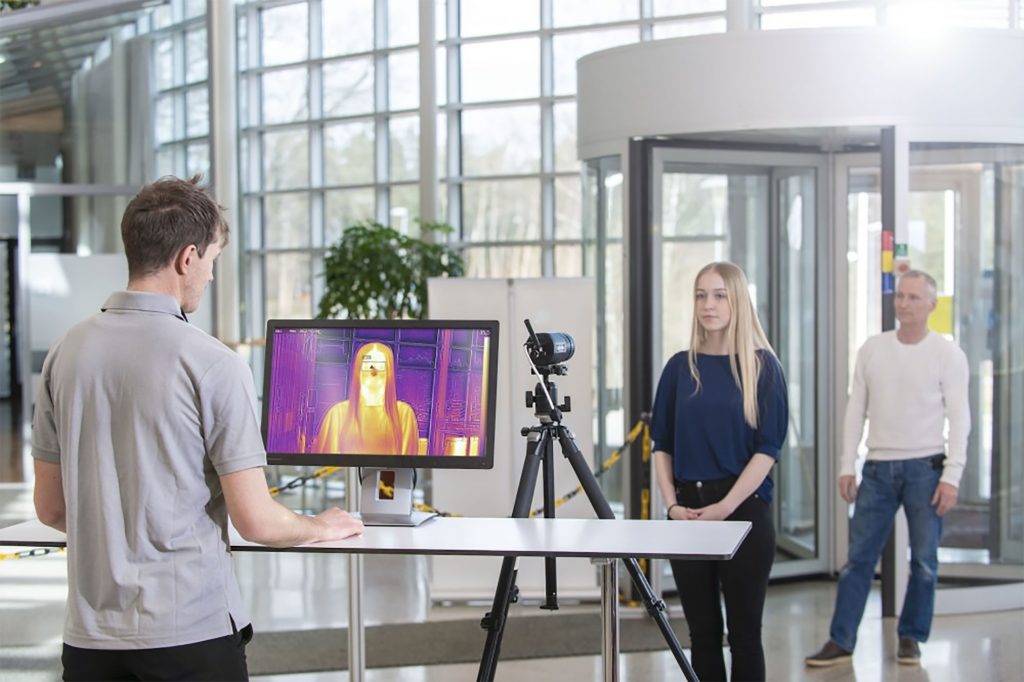 Technologies developed over the past century could be part of the future of protecting employee health in office buildings.

To detect feverish employees who may be sick with the coronavirus, companies have started considering the use of cameras with 60-year-old thermal-imaging technology that the military uses to guide bombs to targets. Air ventilation systems may also be improved, building on the idea from a century ago that better air in buildings helps prevent the spread of infectious diseases.

“We’re going to engineer our way out” of this health crisis, said Travis Hollman, whose Dallas-based company makes lockers that incorporate nanotechnology for professional and collegiate sports teams as well as companies. “Science is going to be the winner.”

Real estate industry professionals said these technologies will contribute to broader measures that make buildings safer for employees, residents and customers in the wake of the coronavirus pandemic. More property owners are focused on certifying that their buildings are healthy places to work, live and visit.

During the first Persian Gulf War in 1991, television images showed laser-guided bombs hitting their targets using forward-looking infrared radar, known as FLIR. The technology had been around since Dallas-based Texas Instruments started developing it in the mid-1950s, but that war put the technology front and center.

FLIR detects heat and then converts it into a thermal image. Thermal imaging is used to find people lost at sea, assist firefighters in pinpointing the source of a fire and guides pilots through poor flying conditions.

Now, the technology is getting greater attention as a way for companies to monitor and screen employees and customers coming into their buildings. A prevalent handheld version can be used to check people’s temperatures.

And now companies that make or sell thermal cameras, which measure any deviation in normal temperature, are reporting a backlog in orders.

Companies can use thermal cameras to screen employees prior to entering an office, like at an airport security station, measuring body temperature for a possible fever. Companies such as Amazon, Tyson Foods and Intel have looked into or have used thermal cameras at their facilities, according to Reuters.

Tim McDowd, a spokesman for Wilsonville, Oregon-based FLIR Systems, a company founded in 1978, said by email that the company has drawn significant interest around the world in its cameras because of the coronavirus.

“We’re seeing interest from a variety of organizations” such as Fortune 500 companies “to use thermal in re-opening and/or maintaining their businesses” in the United States, the United Kingdom and beyond, McDowd said in the email.

FLIR Systems reported its backlog of orders at the end of the first quarter was a record $859.3 million, up 2.8% from last year.

FLIR Systems started selling the cameras in Asia to detect fevers in 2003 during the Severe Acute Respiratory Syndrome, otherwise known as SARS, outbreak, and they were used in other countries during the Swine Flu in 2009 and Ebola a few years later, but not in the United States. Ebola and SARS didn’t reach pandemic status in the United States or Europe, but the danger is more pronounced with the coronavirus.

“That’s the major factor for the change” with the latest crisis, McDowd.

Costs for thermal cameras range from a few thousand dollars up to $35,000, according to FLIR Systems. Other companies that make them include Thermoteknix Systems Ltd., based in the United Kingdom, and Infrared Cameras Inc., based in Beaumont, Texas.

The coronavirus, however, presents a big challenge for using thermal-imaging cameras. This virus’s two-week incubation period means that by the time a feverish person is detected, they probably infected others around them already, said Joanna Frank, executive director of New York City-based Center for Active Design. Frank said thermal imaging was more effective with SARS because it started with a fever.

“You erode trust if there’s a claim it is a panacea,” Frank said. She said the technology is valid but it has to be part of a comprehensive plan that ensures the overall health of a building for the safety of its occupants.

Before the pandemic, certifying a building as healthy was a way for property owners to differentiate themselves from competitors by showing prospective tenants that they had the health and wellness features that can attract top talent to join a company with an office in the building.

Different certifications such as Fitwel and WELL overlap with Leadership in Energy and Environmental Design, otherwise known as LEED, a green-building certification process started in the mid-1990s that took years to become a must-have in real estate development.

But designing a building with health and wellness in mind costs money, as does retrofitting existing ones.

“You have to invest in things that you don’t see a tangible benefit,” Joseph Allen, assistant professor at Harvard University’s T.H. Chan School of Public Health, said during a recent Urban Land Institute webinar titled “Healthy Buildings as a Public Health Tool.”

Selling property owners on taking the leap to healthy-building certification meant convincing them that they would get a return on investment. Boston Properties, one of the largest office property owners in the United States with more than 52 million square feet, bought into the idea and has millions of square feet certified with Fitwel.

The coronavirus pandemic changed the selling equation dramatically. “It’s a really quick turnaround” from return on equity to risk mitigation, said Frank, whose organization oversees Fitwel, one of two certification options for landlords.

Air ventilation is a big area where an infectious disease can either be stopped or spread. Experts note that people spend about 90% of their lives indoors.

The concept of good air quality and ventilation affecting health is nothing new. In his ULI presentation, Allen, the Harvard professor, cited Alice Hamilton, Harvard’s first female professor, who determined that airborne contaminants had a negative effect on health. She was the first to put in place “workplace controls to reduce occupational risks using the building and ventilation system,” he said.

The amount of outside air allowed into a building became part of the standard. “For decades in the early 1900s, these early ventilation standards were set based on infectious disease,” Allen said.

Engineers started focusing on energy efficiency in the 1970s over the standards designed for health and infectious disease and “ushered in this era of sick building syndrome.”

The need for better indoor air quality was gaining interest prior to the pandemic.

Solutions, however, may not necessarily be high technology. Accesso Partners, a Florida real estate investor that has a 40-building portfolio, has a process that pumps antimicrobial enzymes into the coils to remove bacteria and other harmful substances.

It not only improves air quality but it also helps energy efficiency, said Tony Clasen, Accesso’s director of national operations.

Accesso implemented what it calls Blue Box, which was developed with Aventura, Florida-based consulting firm Onpeak Energy, earlier this year before government officials started issuing stay-home orders to combat the spread of the coronavirus.

Clasen said the company had gone through LEED certification and knew indoor air quality was the next industry push. “We’re just trying to get ahead of it,” he said.

Meanwhile, decisions made in buildings today will have lasting implications for design and real estate.